I don't discuss my son's Autism much, but I felt it was important to share our story so other parents will understand the importance of Early Intervention.

Two years ago I didn't know what to do. Something was off with my three year old. While other kids his age played together and talked with each other J didn't. He'd tag along with them or play if they pulled him along, or he'd start playing hide and seek and not tell them - luckily he was the seeker. If I asked if he wanted a strawberry or a banana he'd answer banana and then get frustrated I didn't give him the strawberry. His speech consisted of phrases he'd heard on tv or read in a book. I hated to constantly compare him to other kids, but something just didn't feel right. 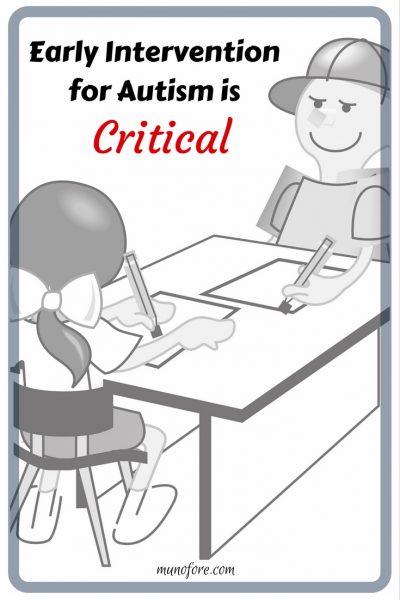 My friend Mary came to the rescue! She suggested we take him to the school district and see if he qualified for services. What kind of services I had no idea. When we mentioned our concerns to his pediatrician she said he was not autistic since he was participating in the exam and interacting with her. Ok, he was trying his darndest to leave the room, but I guess that meant he was "interacting". She agreed that going to the school district was a good idea so they could help him as soon as possible if needed.

Test with the School District

I immediately made an appointment with the school district. The last one of the school year. I mean literally, the teachers were doing their final pack up of their classrooms while we were doing preliminary testing. She wanted to see us back in the fall for testing by a whole group of people: Speech Therapist, Occupational Therapist, Psychologist and Autism Specialists.

After a summer of stressing about the terms "special education" and "autism" and wondering if we were making a big deal about nothing we finally got started testing in late September. Everything except the Autism specialist, due to a series of mishaps and personal issues with the staff J did not get the testing for that until February. Had I known what services he was going to qualify for I would have pushed and pushed HARD to get it done sooner rather than later.

Even without the Autism part of the puzzle, J qualified for Special Day Preschool. But it wasn't offered at the school two blocks from our home. No, we had to go three miles down the road. Not a big deal if you have two cars. We do not. J and I became cyclists and I spent a lot of time at the neighborhood coffee shop and library while I waited for him to finish. Four mornings a week he was working with some wonderful people and we started to notice a difference.

[Tweet "One family's success story with early diagnosis and intervention for #Autism. "]

The addition of ABA

Finally in February the missing testing was completed and he qualified for Applied Behavioral Analysis.

In addition to the 2 ½ hours of preschool a day he would be meeting for another 2 ½ hours for one on one tutoring. Five hours four days a week, that is more than they do in Kindergarten! But by this point we KNEW, it was pay the price now or potentially pay much more later.

Wow! Did he start improving by leaps and bounds at that point. He LOVED Ms. Michelle! And he LOVES her replacement Ms. Vivian. These women, and a few other subs here and there have made a huge difference in his life.

In February it was decided that he was doing so well that he didn't need the one on one tutoring anymore but could benefit from more social interaction. So, for the last few months he has basically been auditing the General Ed Preschool with his tutor for a few hours a day. Mixed with the "normal" kids, but still getting extra assistance.

Yesterday, we sat in a room with NINE, yes nine, educators to discuss where J is going to start off Kindergarten in August. Just a little intimidating. Even for two parents with plenty of educators in their families and a fairly decent amount of self-education as to what the possible and probable outcome of the meeting was going to be.

Then came the moment of truth - the consensus is - drumroll please - he will be in a General Education class with someone from the Autism department helping him, mostly with the social skills as well as some Speech Therapy and the Occupational Therapist consult (going to get rid of that Psycho grip on writing tools yet!).

Phew! All of the hard work on EVERYONE's part has paid off. He has improved enough to join the general school population, AND he will continue to get the extra assistance he still needs.

As we were wrapping up the meeting, the Special Education Specialist said,

"J is a poster child for early intervention."

AMEN! I don't want to think where we would be if we hadn't gone through all of this these past two years. I'd be more of a basket case than I already am, M would be stressed because I am stressed and J... well, maybe he would have made this progress on his own. But, I doubt it.

Know the early signs of Autism

Here is a list of warning signs for Autism to keep in mind in a child's development.

Go visit Autismspeaks.org and educate yourself. Talk to the Pediatrician. Call the Special Education Department of your local school district. Be proactive. Get out of your comfort zone. Drop your stereotypes and preconcieved ideas about "autism" and "special education". Don't beat yourself (or each other) up or try to assess blame.  Get your child evaluated by professionals as soon as you suspect something might be off. They will help your child and help you to help your child.

Even if your child does not qualify for services now, having them already "in the system" will expedite testing down the road if things do become a problem.

If you don't have children that fit this description, but you know someone that does, please forward this on to them.

We are not done with this journey by a long shot, but we have cleared the first hurdle. And like an Olympic level hurdler we did it through lots of hard work, lots of help and starting as early as we could.