That is the Sunday New York Times Crossword Puzzle IN PEN!!!
Ha ha, if you look closely you can see he was just writing words and numbers in the squares.﻿
Actually, he really did amaze us with his memory and reading ability today. You'd think not much would surprise us at this point. We were talking about Super Mario/Luigi Brothers U and he mentioned that Peach's Castle Level 1 is called Meteor Moat. So my husband jokingly asked him what Peach's Castle level 4 was. He thought for a few seconds then said Firefall Cliffs. This went on for about 10 different levels and he got everyone right.
He has memorized the Table of Contents of the Player's Guide!!! Not only can he read it (3 weeks into Kindergarten), but he has memorized it! Even words like Lakitu.
Me: Do you know who Lakitu is?
Him: The guy in the cloud with the glasses (as he grabbed my glasses, grr!) 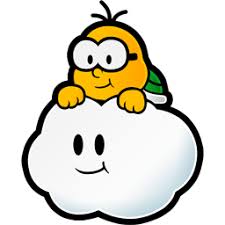 But he still insists Sparkling Waters Tower level is pronounced "Shoosh Kabot" instead of Shish Kabob.