Hey parents, are you looking for some family friendly YouTube Gamers for your kids to watch that will entertain them and not make you cringe? As a fun little exercise today, my son and I put together a list of our favorite YouTube Gamers. Plus a bonus one that Mom and Dad watch when he isn't around. 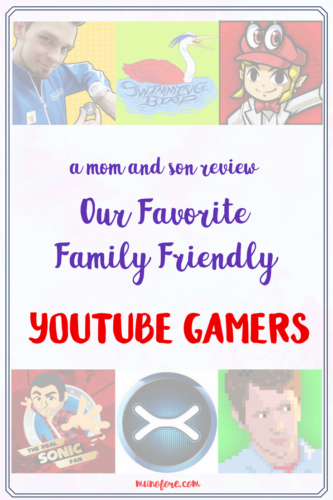 Yes, I let my son watch video gamers on YouTube. No, I haven't quit my job as a parent or completely lost my mind. I have my rules which must be followed or I get his iPad.

At this point the type of games has not been an issue. He currently likes the fun cartoony type games versus realistic hack and slash, shooters or games with dark themes to them. The sexual innuendos in the videos he has watched have been rare and all have gone over his head. In all likelihood his tastes will change as will our definition of age appropriate.

And the added bonus... Don't get your work done at school or home, disrespectful to adults, repeating any profanity, etc. and electronics are banished. It is one of the biggest punishments for him.

Son: "I like his videos because there are not a lot of commercials and they are all about 30 minutes. "

Mom: Abdallah is my hero! And I have violated the "no commenting" rule to tell him so.

In some of his videos he slips in "life lessons from Abdallah" telling viewers things like "Don't be a picky eater." and "If someone has something on their teeth tell them." But my favorite was when something very frustrating happened in a game and he just sat there quietly. No screaming, no profanity, no controller throwing. He just fumed silently until he could control himself. Hello, teachable moment! I probably made my son watch it 4 or 5 times in a row hoping he'd learn from it.

One thing to note is that Abdallah's videos do not have as many commercials as the others because he uses a subscription model. While the videos are free to watch, viewers are encouraged to subscribe to get extra benefits like special emojis in chat.

I do Sonic news and 1080p/60fps gameplays without commentary. 🙂

Son: "I like him best because he doesn't talk."

Mom: The irony that my son, who never stops talking, likes the gamer that doesn't talk the best is not lost on me.

It is actually refreshing when he watches these because it is just the game and music with no extra voice over.

He occasionally does games other than Sonic, but that is his main focus.

Son: "I like him because he doesn't get defeated too many times because he is a good player and he reads what to do."

Mom: Out of all of these, I would say Adam aka SwimmingBird is the best overall gamer. He not only has great gaming skills, but he uses his brain to develop strategies as well. He doesn't just jump into a game, skip through the instructions quickly and then wonder why he keeps losing or can't find what he is supposed to find.  He takes the time and reads the in game text. Ah yes, another teachable moment (as evidenced by my son's comment above)!

As a female gamer, I love when his girlfriend Danielle joins him because she can hold her own with a controller too. When I was getting the links for this post I found out they met online playing Pokemon! <3

Adam hasn't posted any videos in a few months and I hope it is only because there is a bit of a lull in games to play at the moment.

Son: "I like him because he even plays fan made games."

Mom: While he does play official Nintendo titles, he also plays games that people create just for fun. I have to applaud someone that gives the small guy a chance at the spotlight. Without him showcasing those games most people would never even hear of them, which is a shame.

My one knock is that Sully is the football color commentator of the YouTube Gamers. He needs to learn to let the game play speak for itself sometimes instead of feeling he needs to talk the entire time.

I aim to keep my commentary aligned with a game's rating. If a game is rated E, my solo commentary is clean out of respect to the viewers, publishers, and parents. The same does not apply to unrated or mature games, or if other people appear in my videos

Mom: Zack was one of the first YouTubers we discovered. We have relied on him to play games and make videos that we have no intention of playing, but my son gets to enjoy games he isn't capable of playing.

His dogs are sometimes heard in his videos, and the cats appear in his Outro (ending credits). When Otto died his fans were almost as devastated as he was.

One thing to note is that Zack sometimes gets frustrated and whiney when things don't go his way in a game. And his language has been known to slip even on E rated games. Just something to be aware of.

In-depth reviews, secrets, discussions, trailer analyses and a whole lot more for all kinds of Nintendo Switch, PlayStation 4, and Xbox One.

Mom and Dad: This is the one we watch without our son. Not because it isn't family friendly, they absolutely are! All of the gamers mentioned above produce "Let's Plays" or "How to" game play videos, them actually playing through a game. The crew at GameXplain are more about the news about upcoming games and rumors etc. Interesting to two long time gamers and former industry professionals, not so much to our son right now.

So there you have it six family friendly YouTube gamers your kids will enjoy. Our list is not the least bit inclusive, there are plenty of other great ones out there.