In August 1967 in Fairbanks, Alaska, Carl and Ruth Smith had the truck loaded up to go camping with their two sons Stony, age 12, and Clark (aka Hoppy), age 10. Then the rains came, almost 4 inches in the 24 hours prior to noon on August 12. In the next few days the Chena River flooded. It would later come to be known as Fairbanks Great Flood. 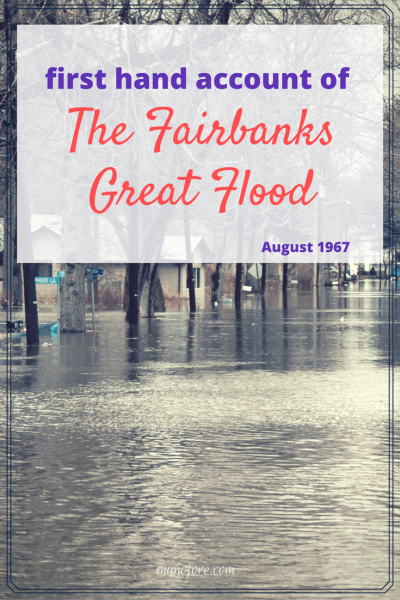 The Smith family eventually made it from their home to high ground at University of Alaska where they stayed with most of the residents of Fairbanks for a week. Ruth managed to get a note out to her oldest daughter, my Mom, in California using the only paper she could find.

The rest of the letter was written on the back of deposit slips.

Tuesday morning. Six stories up in Moore Hall, University of Alaska. Well they say that certain things can be told to your grandchildren. We certainly have one to tell somebody. I am writing this on the paper I have. We are well and safe now but we certainly got out with only our skins. My wardrobe now consists of one very wet pair of blue jeans and one of your old pink knitted blouses and one pair of underwear. Daddy and the boys are no better except they are not as wet as I am. Haines Avenue broke last night some where about 8 o'clock. Daddy had

been down Eureka helping to try to keep a basement dry but is {sic} was absolutely hopeless. 17 feet of water was on us. Everybody took to Trainer Gate Road - the only exit. A car in front of us stalled and sent back waves on us and flooded out engine. There was nothing to do but get out and walk. I took my purse and we had stuffed our savings bonds in a manilla file so we took that. Daddy took Stony on his back and I took Hoppy. Daddy had on his hip boots but I just had my snow boots. We

waded water about 30 inches deep surging down Trainer Rd from C Street to the Club Car. Ken Haycraft came along and took Hop for about half the way. It certainly did help but I would have made it. We stayed at the corner at the Club Car for 30 minutes or longer when Ed Prince opened up the Cat Shop and we got in over there. The boys and I stayed there while Daddy went back and help other people carry their children out. He finally got a pick up

that could pull us us {sic}. He got out pick up on the railroad bed and it started - it just had to - . But we stayed at the Cat Shop until after 12 and had to leave because the water was coming in there. Daddy (and others) walked along to feel out the road bed and then came back and drove on. We were in water until we made the bend at Birch Hill. People were camped right in among the graves and on both sides of the vault. But we were running so we kept going.

The radio was on and they told us the U of A was available. We got here at 3:15 this morning. Wet and tired but altogether.  Miss Utila is here. She is the only one I know that you know. The Brunners were stranded on Trainer Rd. too. I don't know where they got to. One family got seperated and I have not heard if they are back together or not. The Police, Fireman {sic}, news staff, Civil Defense have done a good job but it was simply too huge a job to handle. We were never in any danger at all it was rather a "high charged" exceitement.

When we left the pick up on Trainer Gate both boys almost panicked. They just were not going to leave but when they saw there was no other way and once we were out in the water they calmed down. It was around 50 degrees so it wasn't too cold. It rained or misted all the time but I did not get wet above my hips - just damp. But I have no shoes or other clothes. We have bedding, food and water in the pick up but it is so damp we felt it best to come here out of the elements. We have only a little gas for the gasoline stove and no idea when we can get more. We have no wood at all. So. Love, Mom.

Let this be a lesson!

I have read this letter a few times, but retyping it now I got chills. So proud to come from such strong stock!

Among the many other things they lost due to the flood was almost all of the family photographs. Which is why it is my mission to scan and upload as many family pictures (and letters) and get them "on the cloud", so if there is another earthquake, fire, flood, hurricane, or some other natural disaster we don't lose everything again. Hoping my family will help out and scan and share what they have.

« wishin I could choose my own genes
10 Things That “Piss” Me Off About Potty Training - “Crap”py products and advice that are supposed to help but don't. »