One of the characteristics common among people on the Autism Spectrum is a lack of social awareness. Many, like my son, do not have an innate understanding of the social skills many of us take for granted. Personal space, appropriate vocal loudness, visual and verbal cues most of us use to interpret a situation need to be taught and retaught.

My son becomes so absorbed in his interests that he is oblivious to those around him. I often joke that he is in his own world and occasionally stops in to visit ours.

Sometimes his lack of social awareness is actually a blessing in disguise, like when some kids at school ridiculed him for getting muddy or told him only girls wear red rain boots. In both instances he didn't care he was being made fun of. Unfortunately, he also didn't understand his friends were coming to his defense. 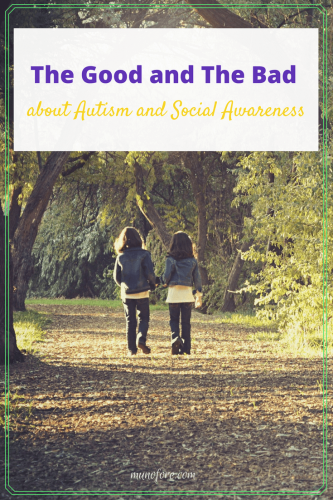 This weekend two separate instances let me know all of the hard work developing his social skills is getting through to him. And I admit I have mixed feelings about it.

[Tweet "As an #Autism mom, I struggle with my son's increasing social awareness. #parenting"]

Two of his friends come over after school and I treat them to popsicles because it has been so hot on our walk home. One can't have dairy. When we were at the store I told J he could pick some out for the three of them. He stood surveying his choices for a bit then asked me "Can Kai have these?" Unfortunately they were fudgesicles, #1 ingredient is nonfat milk. He disappointingly put them back and chose something else. I could tell he really wanted them but picking something everyone could have was more important.

His class gets to bring a stuff animal to class for the day as a reward for their Fun Run.  He is a bit obsessed with Mario and everyone knows it.  He has a few dozen Super Mario plush.

Mom: "Which plush are you bringing tomorrow?"

Son: "One of my old ones, like a bear or something."

Mom: "You don't want to bring Mario or Luigi?"

Son: "Nobody in my class likes Mario, so I will just bring something else."

**CRASH** the sound of my heart breaking as I realized he is starting to care about what other people think and trying to conform to their expectations.

I want my child to be happy. I want him to find his place in the world. I want him to know he can fit in, but still stand out. Just like all parents.