Two weeks ago we were playing out front and I casually mentioned that I would like to rip out some more half dead grass and just put in more native plants. My husband looked at the space and said "Next weekend". "Yes, honey, next weekend is your birthday and your last days off until May."

Well, the night of his birthday he grabbed the shovel and hoe and starting digging up the grass.

My job was to entertain J and haul the grass to the backyard to be dealt with later. We don't have a wheelbarrow, but I needed something with wheels. I turned and looked in the garage and there was Big Blue!  You can just see it sticking out in the photo above. I dumped all the toys out and it was perfect!

You have served me well, old friend. Hopefully a hose down and maybe a little sewing and you will be as good as new. Or at least good enough to still be useful.

On Tuesday we went down to "the mulch place" after dropping J off at school. Southern California Mulch in Menifee rocks! We knew what we needed so we quickly ordered, stopped at the store for a few supplies and then headed back home. Within 5 minutes of walking in the door they were backing their truck up and dropping off my 3 cubic yards of mulch!!

Only one yard for this space, the other two are to fill in some places in the backyard.

Thursday was plant day. We went down to Las Pilitas Nursery in Escondido to pick out our native plants. I took a picture of the space with me and told them I wanted a butterfly/hummingbird garden that would be the envy of the neighborhood (and hopefully convince others to go native). It took some doing because the space gets full sun, but is consistently wet due to the neighbors overwatering their lawn. But we settled on:

Today I moved a few plants from other places in my yard like Yarrow and Erigeron glaucus (Seaside Daisy). We'll see how they all do in a few months.

This is the only grass we have left, which we will keep for a few years since it is still fun to play on and have picnics.

I am done for now. Except for the piles of mulch scattered throughout the backyard and that big pile of dying grass. Maybe next week. 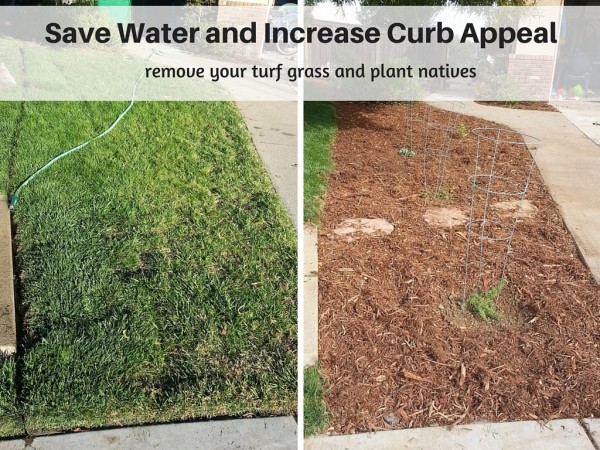 « My BEST blogging tip EVER.
What is better than free money? »