Is your social media filled with clutter and negativity? Do you repeatedly see posts and ads for things that bore you (or worse anger you)? Is it starting to impact your attitude?

I was about ready to log off permanently, which would be a death knell to the blogs. Instead, I decided to take control. 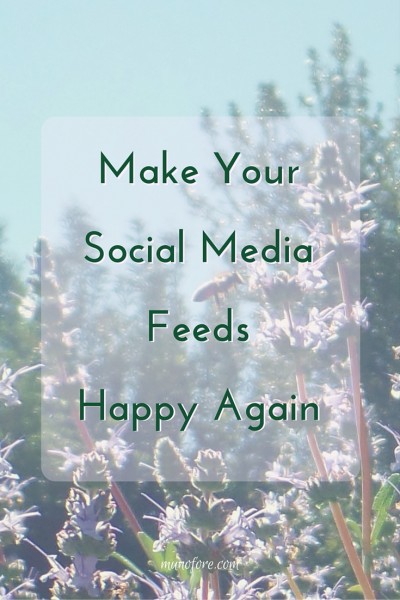 There is a simple little trick to make much of the negativity go away and be replaced with things you actually want to see. Are you ready?

Yes, it really is that simple. Why?

It isn't just the ephemeral concept of a Positive Mental Attitude attracting positive happenings. It is a little thing called 'algorithms'.

Stop crying fellow bloggers. The word gives me the shakes sometimes too. You can make the algorithms work in your favor.

For those not in the know, I am referring to the formulas the social media sites and ad servers use to determine what to show you. The best way for me to explain it is in the words of Johnny Mercer's immortal tune

Accentuate the positive
Eliminate the negative
Latch on to the affirmative
Don't mess with Mr. In Between

Have you ever noticed that the moment you search for something like "hotel rates in San Diego" you suddenly start seeing ads for hotels and other San Diego attractions everywhere online? Google, Facebook, Twitter, etc. show you more of what you search for and click on.

If you buy new toilet seats you start to see ads for home repair (true story). If you click on cat memes, they think you like cat memes so suddenly your news feed (or suggested pins, etc.) are filled with cat memes. If you share a recipe from a food blogger's page (That Recipe for example, wink wink), you will start to see more posts from that page.

This is the most important one. If you don't like it, don't click on it. I know, I know. It is hard. I am definitely guilty of doing this.

What did the idiot politician say now? What did that famous for being famous celebrity do this time? Ugh! this meme offends me so I will comment that it offends me and share it telling everyone how it offends me.

At this time, they cannot tell you actually don't like it. Any interaction indicates you want to see more of it. Using the new FB "likes" doesn't tell FB you don't want to see more posts like that. You interacted so they assume you want more.

Are there pages on Facebook that you followed but rarely see posts from them? You didn't interact enough with them so they dropped off you newsfeed.

Consider hiding, unfollowing, and unfriending people and pages that continually post things you don't want to see. I have done it in the past with the local paper that posted controversial issues in every post in order to get comments and likes - bye bye!

Eight months before the presidential election and I have a dozen friends and family members that are driving me crazy with their relentless partisan political posts. It is literally all they post about these days. And I can only ignore it for so long. They continually bash the candidates they don't like. SURPRISE! Social Media counts this as a mention and not only do they see more about that person it increases that candidate's popularity.

Rule: Ignore what you don't want to see. Consider unfollowing people/pages that make you upset.

Latch on to the Affirmative

Clicking on what you like not only helps define what is shown to you, it also influences what is shown to other people with similar interests to you. The social media algorithms show people "popular posts". The more popular the posts, the more it gets shown. Both to you and to everyone else.

The concept is pretty universal and not limited to social media. The more popular something is, the more it gets talked about and the more it is shared the more popular it becomes, and so on and so on. As I said above about the politics, it doesn't matter if the talk is negative or positive, publicity is publicity.  Refer to that "K" family in Hollywood that are famous for being famous. They don't do anything to make the world a better place, but everything they do is talked about. If we all stop talking about them and clicking on articles about them, will they go away?

Do your little part for increasing the popularity of things you like by sharing them. This will increase the likelihood that your friends and people that like the same thing as you will see it and share it. Don't like it, keep scrolling.

Rule: Share what you love to increase it's popularity.

Don't Mess with Mr. In Between

Who is the Mr. In Between on social media? The bane of my existence... click bait.

Some of those might look entertaining, but unless you are sure you want to see more posts like that KEEP SCROLLING! I have no real idea what I will find when I click on the link. And more often than not it is just a colossal waste of time. That can of milk in 3 minutes? A 3 minute video of someone explaining how to use a crock pot to make dulce de leche with a can of sweetened condensed milk that actually takes HOURS to complete.
Rule: if you aren't sure what the post is about, ignore it.

Spread Joy Up to the Maximum

I have been trying to follow these rules the last few weeks and slowly but surely it is taking effect. Now, I am off to find those pages that have dropped off my feed and like a bunch of their posts so they start appearing again.